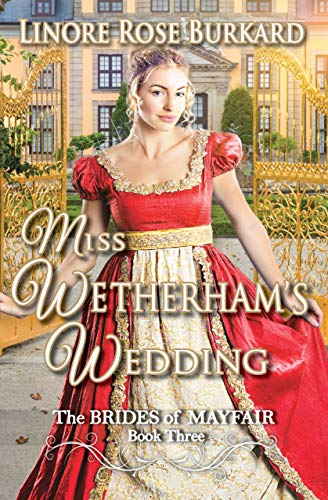 Miss Wetherham’s Wedding is the third book in the Brides of Mayfair series by Linore Rose Burkard set in London in the early nineteenth century. Having been left a widow at a fairly young age, Lettie Wetherham’s future is anything but secure, especially as she expresses no desire to marry again.

Nicholas Dellacort’s nose is out of joint because Sophia Alden’s father has accepted an offer for her hand from the much wealthier Lord Elston, Earl Brest instead of him. Learning of Lettie’s reputation as a matchmaker, he hires her to disrupt the engagement but things do not go according to plan. Lettie is well out of her comfort zone as Nick promises that each awkward encounter will be the last but, due to her dire financial situation, she really has no choice but to carry on.

The characters are well developed and the chemistry between them makes for some amusing conversations. The authentic period feel of London during the season is convincing, obviously the result of a lot of research, and the helpful glossary is useful for filling in any gaps in the reader’s knowledge. I have read a lot of Regency novels, but still learned some new expressions. I really enjoyed Miss Wetherham’s Wedding and now plan to go back and read the second one in the series.

Thanks to Linore Rose Burkard for a digital copy of Miss Wetherham’s Wedding that I review as a member of Rosie’s Book Review Team.