If She Wakes by Erik Therme 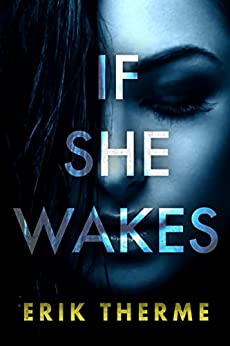 If She Wakes is the second book in the Harlow series and sequel to If She Dies which I reviewed last year. At the end of the first book there were a lot of loose ends and a feeling it was not all over yet – I can now see why. It is now two years since Tess and Josh’s daughter died, and her grief is compounded by the recent death of her brother. After a car accident leaves Torrie in a coma, Tess and Josh are caring for their nephew, Levi. When Torrie’s sisters turn up, Tess is suspicious because Torrie had previously claimed she had no family. Their appearance just adds to Tess’s problems because none of them is being entirely truthful.

Once again the story is told entirely from Tess’s point of view, we are inside her head and privy to all her obsessive thoughts. Tess is a wonderfully drawn and fascinating character whose grief has pushed her very close to the edge; she is hanging on with her fingernails. She may be paranoid but maybe someone really is out to get her. Despite appearances, Tess has not really changed all that much. Her marriage is in a slightly better place now, but starts to show cracks again with the strain of all that is happening.  To me, Josh is still as unsupportive and irritating as he was before – no wonder Tess doesn’t tell him everything.

I’m not sure putting the backstory in the prologue works too well; perhaps not giving so much information all at once would be better, and might encourage readers to seek out If She Dies first. The pace is erratic at times, but the writing is gripping and the surprising twist near the end comes out of nowhere – I was hooked and read it in two sittings. The ending seems to suggest that there will be a third book to look forward to. Thanks to Erik Therme for a digital copy that I review as a member of Rosie’s Book Review Team #RBRT