The Blood Tide by Neil Lancaster 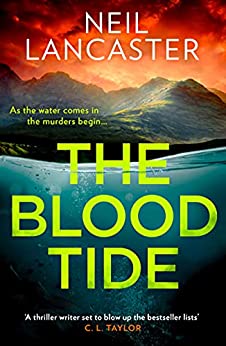 Thousands of miles of unprotected coastline have made Scotland very attractive to drug smugglers in Neil Lancaster’s new crime novel The Blood Tide. The follow up to the excellent Dead Man’s Grave once again sees DS Max Craigie and DC Janey Calder trying to root out corrupt officers at the very highest level in Scottish law enforcement agencies.

The disappearance of a fisherman from the shores of Loch Torridon, and the suicide of an NCA officer who feels his only course of action is to jump from the Erskine Bridge seem, initially, to have nothing to connect them. When an old friend and colleague of Max’s is found dead in ambiguous circumstances, and also happened to be the officer who tried to prevent the suicide on the bridge, Max’s suspicions are aroused.

Once again, we get to travel around Scotland, and view the glorious scenery, as Max and his team investigate how the criminals always seem to be one step ahead. Neil Lancaster was formerly an officer in the Met, but his love of his adopted home country shines through. His former experience also lends an authentic feel to the details of the crime scenes and how the investigations are carried out.

The characters are well written and convincing, the action is fast paced and gripping, and the humorous banter helps to take the edge off the horrific violence they encounter on a daily basis. Although you could read The Blood Tide as a standalone, it would make more sense to read Dead Man’s Grave first or you will have more questions than answers. Thanks to HarperCollins and NetGalley for a digital copy to review. I have already ordered the paperback, and am looking forward to the third book in the series, The Night Watch, due to be published later in the year.

The Forgotten Maid by Jane Cable 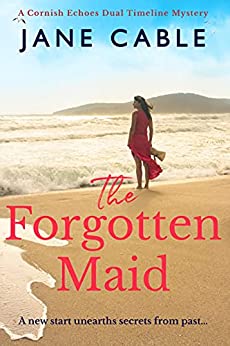 The Forgotten Maid is a dual-timeline historical novel set in Porthnevek in Cornwall in 1815 and 2015. In the present day, Anna is in Cornwall to set up a luxury glamping site which is not popular with some of the locals. She volunteers at a National Trust property, Trelissick, and is given the role of a French maid. Thérèse Ruguel  came to serve the Daniell family after fleeing the aftermath of the battle of Waterloo where she feared her brother had been killed.

The pace is slow to start with as both timelines are established, and they are both equally gripping. The story is told in alternate sections of several chapters at a time which helps to immerse the reader in both stories. There are parallels between the lives of Thérèse and Anna as neither of them receives a particularly warm welcome in Cornwall, and they are both just looking for somewhere to call home.

Set in the Regency period, Thérèse’s story shows a slightly different side of life than is usually depicted in novels. There is a strong sense of place showing the effects of industrialisation on Cornwall, and how reliant they are on tourism nowadays, which is obviously the result of thorough research that is woven seamlessly into the narrative. I would have liked to know a bit more about Anna’s past as family troubles were hinted at but not really dealt with in enough depth.

I had not read anything by Jane Cable before but will definitely look out for her books in the future. Thanks to Sapere Books for a digital copy to review.

The Cat Who Saved Books by Sosuke Natsukawa

I requested The Cat Who Saved Books as it features two of my favourite things, not realising that it was aimed at YA readers. While this does not make it unsuitable for adult readers, it probably explains why I found it a bit unsatisfying. Despite it being a fairly short book, it took me several goes to finish it as I was not sufficiently gripped each time I picked it up. It is well written and expertly translated from the Japanese, but it fell short of what I was expecting. Also, the cat does not feature as strongly as the title suggests. I can see The Cat Who Saved Books would work well as a Studio Ghibli film. The story explores themes of not fitting in, grief, loss and loneliness with great sensitivity, and I totally agree with the idea that reading creates empathy, and it doesn’t matter what you read as long as you do. Thanks to Picador and NetGalley for a digital copy to review.

Originally published in the 1950s, I was offered a copy of a new edition to review. I was introduced to Georgette Heyer books when I was a teenager and have loved them ever since. It is many years since I last read Sylvester, and I was pleasantly surprised to find it was even better than I remembered. I also recommend the audiobook where Richard Armitage does an excellent job of bringing the story to life.

Sylvester Rayne, the Duke of Salford, has decided it is time for him to marry; he is not looking for a love match but someone fitting to be his Duchess. He views Phoebe Marlow as completely unsuitable, but thinking her father has arranged a marriage between them she runs away. She has met him before and found him to be insufferably arrogant. Trapped by a snowstorm at the same lonely country inn, they get better acquainted and discover their first impressions were wrong. Phoebe has written a novel and based the villain on Sylvester. This is not a problem until she finds out the novel is going to be published and everyone will know what she has done.

Beautifully written in an understated way, Sylvester features wonderful characterisation and amusing dialogue. The Regency setting is well researched and vividly described.  In recent years Regency romance novels have become popular again, but Georgette Heyer is still the original and best. Thanks to Random House UK, Arrow and NetGalley for a digital copy to review. 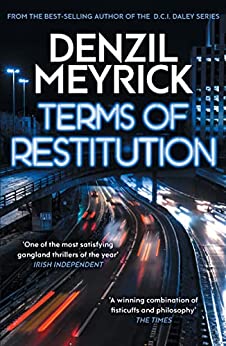 Gangland thrillers are not my favourite genre, but as this was written by Denzil Meyrick, better known for the DCI Daley series, I was keen to give it a go. The action mostly takes place in Glasgow and Paisley where the Finn and Mannion families are engaged in a vicious turf war. Add in some ruthless Albanians and no one is safe. Two years previously, after the brutal murder of his son Danny, Zander Finn had disappeared and no one knew where he was, or so he thought. Now his old friend, Malky Maloney, has turned up to convince him to return home as his family is in danger.

One of the strengths of this book is the cast of strong, well-developed characters, including several impressive females. Zander’s mother, Maggie, just jumps off the page and her obsession with cooking eggs, chips and beans provides a bit of light relief in the midst of all the violence. Zander Finn is a complex character, ruthless when he needs to be, but he is not all bad and will do anything to protect the people he loves. He is so well written that I found myself on his side, hoping that he would emerge victorious despite the things he had done.

Terms of Restitution has a strong sense of place with Paisley and Glasgow almost characters in their own right. The level of violence is what you would expect in a novel depicting the criminal underworld of a city. Everyone is double-crossing each other, no one can be trusted and the reader is kept guessing right to the end about what is really going on, or at least I was.

Terms of Restitution is a tense and gripping thriller featuring convincing characters, believable dialogue, just enough humour to offset the violence, and a striking cover. I thoroughly enjoyed it and, despite being described as a standalone, I feel there is the possibility of more to come.  Thanks to Polygon for a digital copy that I review as a member of Rosie’s Book Review Team #RBRT